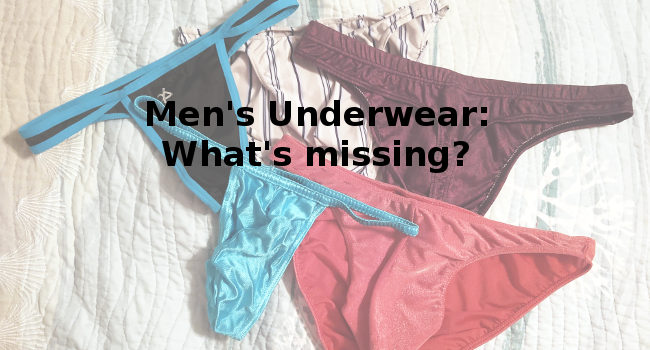 So what underwear am I looking for some may ask? That is if you are not a regular of my blog and didn’t notice what this blog is about. It would be bikinis and thongs. What many still consider women’s underwear. Well that of course is not true. Women just have easy access to all sorts of underwear options including bikini and thong styles. I find it hard to believe stores wouldn’t be able to sell these styles for men. I think if men could stumble upon them or their significant other then it would grab some interest to those who would not be seeking them out online. Or maybe most guys wouldn’t be brave enough to purchase such socially depressed underwear. It would be too hard for them to go against the norm.

Do you think people are aware of the availability of these styles? My guess is probably not many people think much about them for men for everyday wear. It’s still more thought of for strippers and practical jokes. Now, I would say the percentage of guys wearing them have grown since I started wearing them. There are so many online options for us now. So they’ve gotta be being seeked out, but it seems it could grow more if stores would stock them for guys.

I think we’re missing a good assortment of colors, patterns, and prints. Usually for us guys to get the variety we have to go with people that custom make the underwear when ordered. That means they’re probably going to cost more. It seems normally we’ll have a handful of solid colors to choose from in a particular style and cut. Now and then there are a print option or two. Animal prints seem to be the prints we get offered the most. Luckily I like animal prints, but I like to get other prints too. I haven’t noticed a lot of stripe options out there. Then holiday prints seem to be a rarity. I know there are brands that have some variety, but I’d like to see more brands with a variety of colors, patterns, and prints.

We’re missing models of different shapes and sizes. There are exceptions, but we’re starting to see it happening in more places in women’s underwear. Most of us likely don’t have the body of the models photographed. I know for sure I don’t. Would be nice to see some of the styles on a more average guy. Also it seems you have to be well endowed to be an underwear model. Can we have different sizes represented in that area too? I can’t be the only one smaller than them. Yes, some of them could be using some form of enhancement, but still there is a variety in package sizes.

I’m going to round this list out with the lack of acceptance of bikini and thong underwear for men. It’s sad people still don’t think bikinis and thongs are an appropriate option for males. I still hear from guys that their wifes think they are women’s styles and men don’t wear them. It would be very frustrating to be in that situation. What is wrong with guys feeling sexy and good about themselves? They are very practical underwear options for guys. I’ve talked about it many times on the blog about why they are. I don’t get why people can not understand it. I suppose bikinis could have some acceptance if a full bikini cut with an elastic waistband that looks close to a brief. Of course not the cut I go for.

Those are a few things missing in men’s underwear. If there was better marketing (something missing) for them then maybe these things would change. It’s too expensive for the smaller brands to penetrate the mass marketing they need. We need the bigger brands that are in stores to start offering and promoting bikinis and thongs for guys. Probably not going to happen, so I won’t be holding my breathe. At least some of us have discovered these fun styles and can wear them proudly. Hopefully, others will catch a glimpse and get intrigued. As more guys buy them maybe we’ll get more of some of the things mentioned. What else would you say is missing in men’s underwear?

Check out these posts